Posted by Janie Viehman on June 4, 2014 in Featured Merchandise 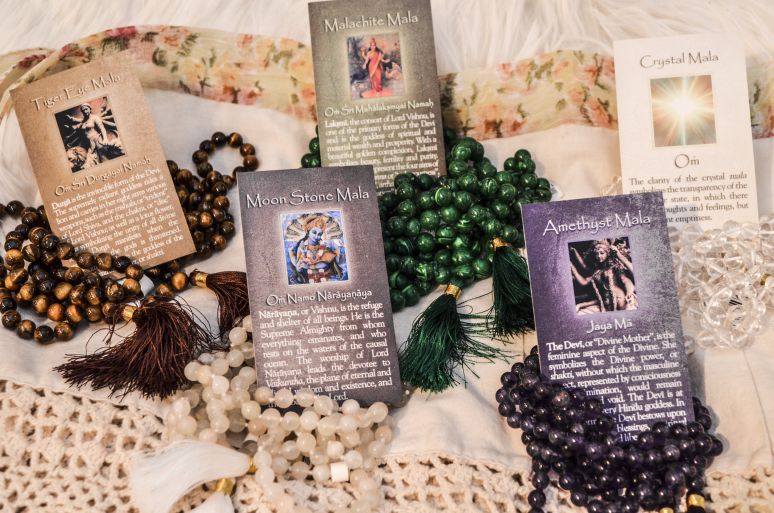 A mala typically consists of 108 beads and an additional bead called a sumeru. With each bead one repeats a mantra. The mala should be held in the right hand with the middle finger and thumb. The purpose of repeating these mantras and using mala's is to preform japa.

Prabhuji, the women we recieve these beautiful pieces from explains, "Japa is a kind of communication between 'here' and 'beyond', between the part and the Whole. As with any type of communication, it cannot be a mumbling of empty words, or a mechanical or robotic repetition, but must be the expression of an authentic and sincere intention." 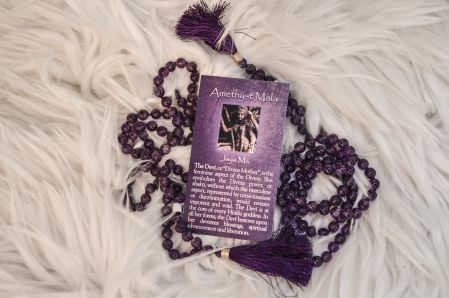 The Devi, or 'Divine Mother', is the feminine aspect of the Divine. She symbolizes the Divine power, or shakti, without which the masculine aspect, represented by consciousness or discrimination, would remain impotent and void. The Devi is at the core of every hindu goddess. In all her forms, the Devi bestows upon her devotees blessings, spiritual advancement and liberation. 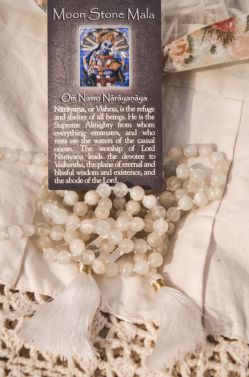 Narayana, or Vishnu, is the refuge and shelter of all beings. He is the Supreme Almighty from whom everything emanates, and who rests on the waters of the causal ocean. The worship of Lord Narayana leads the devotee to Vaikuntha, the plane of eternal and blissful wisdom and existence, and the abode of the Lord. 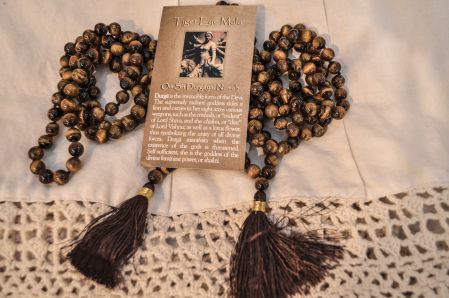 Durga is the invincible form of the Devi. The supremely radiant goddess rides a lion and carries in her eight arms various weapons, such as the trishula, or 'trident' of Lord Shiva, and the chakra, or 'disc' of Lord Vishnu; as well as a lotus flower, thus symbolizing the unity of all divine forces. Durga manifests when the existence of the gods is threatened. Self-sufficient, she is the goddess of the divine feminine power, or shakti. 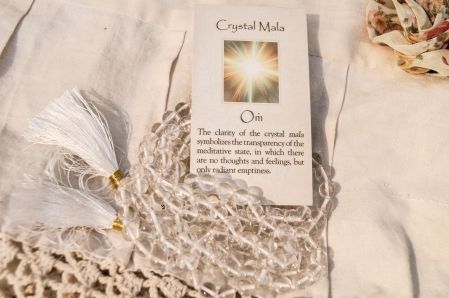 The Clarity of the crystal mala symbolizes the transparency of the meditative state, in which there are no thoughts and feelings, but only radiant emptiness. 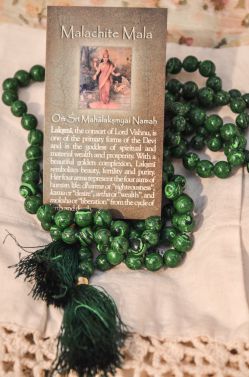 Laksmi, the consort of Lord Vishnu, is one of the primary forms of the Devi and is the goddess of spiritual and material wealth and prosperity. With a beautiful golden complexion, Laksmi symbolizes beauty, fertility and purity. Her four arms represent the four aims of human life: dharma or 'righteousness', kama or 'desire', artha or 'wealth', and moksha or 'liberation' from the cycle of birth and death.