Posted by Janie Viehman on March 13, 2014 in Community

The Creativity Behind Metal Fabrication

For over 15 years Vail Manufacturing Inc. has been the only metal fabrication shop in Eagle County that offers a full-time, hands-on showroom that welcomes clients, designers and contractors. Owned by Carrie and Barry Kroschel, the company prides itself on working with local artisans, supporting the community, developing relationships and creating a sustainable business environment.

“Offering services from repair to architectural work to structural ironwork and most anything to do with metal and welding, we have seen a lot through the years and try to accommodate all projects big and small to the best of our capabilities,” said Manager/welder/fabricator Andrew Burghaus.

Since 2000, Burghaus has been creating unique ironwork such as railings, fireplace doors, chandeliers, furniture and more. The company can also accommodate stainless, aluminum, copper and bronze requests. Both the Kroschels and Burghaus believe that custom-made items have a story behind them which sets these items apart from store-bought options. 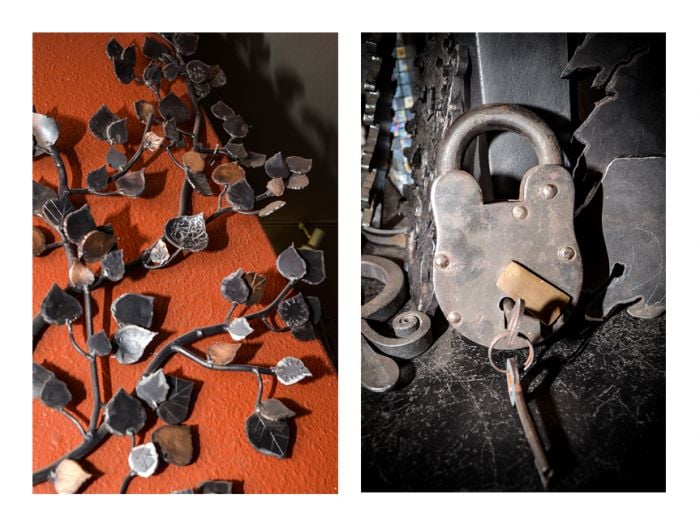 The innovative thinking behind the comapny includes Burghaus’s ironwork background which goes all the way back to high school where he took a wide range of “shop classes” including small engine repair, auto mechanics, wood working, welding and industrial arts.

“I involved myself with all of these courses and art courses including screen printing and jewelry which set a foundation for much of my aging career,” he explained. “Later I was a bench jeweler for local jewelry designer/artist Dan Telleen who owns Karats. While employed with Karats I read a very interesting article on a blacksmith who was building his house. The main feature of his house was a large picture window which used the bottoms of wine bottles wrapped with iron to create the window. A love affair began.”

After reading this article Burghaus researched blacksmithing and found some local learning outlets such as Rocky Mountain Smiths and highly-skilled blacksmith/ teacher Francis Whitaker. Burghaus also attended courses at the John Campbell Folk School in Brasstown, North Carolina and spent some time at Pendland School of Crafts in Bakersville, North Carolina. After finishing up at both schools he completed another year with Karats and then began his next career as a welder/ fabricator here in the valley.

Local History of Vail Manufacturing and The Scarab

Burghaus and Vail Manufacturing also have a long history with The Scarab.

“Vail Manufacturing has been helping The Scarab with unique fabrication jobs over the years,” Burghaus said. “I specifically recall meeting Larry and helping him solve a mounting problem with a shelf from an old cook stove that he was installing. We worked together and built a hidden bracket in the wall that secured the shelf.”

Most recently Burghaus assisted The Scarab with repurposing an industrial fan into a lazy-susan table – a creative team project that required a little extra help from a professional to produce a stellar industrial art piece.

“This was the type of project where there were many possibilities and any one person would have a very different solution,” he explained. “What we decided on was the most stable and economical solution.” This was accomplished within the creative ideas at The Scarab.

Burghaus added, “In the fabrication world we can make most anything happen. It comes down to imagination and being able to communicate the vision so both customer and creator are working towards the same end result.”

Please offer your thoughts in the comments section below. We would love to hear your feedback about Vail Manufacturing and The Scarab.